+menu
In a time of universal deceit, telling the truth is a revolutionary act.
George Orwell [Eric Arthur Blair] (1903-1950)

The Campaign for Philosophical Freedom

Scientific proof of survival after death has existed for over a century.

The Campaign for Philosophical Freedom is a non-profit organisation founded by Michael Roll to present the censored secular scientific case for survival after death - the case for a separate mind and brain, the scientific proof that we all survive the death of our physical bodies, irrespective of our religious beliefs.

Losing a Loved one is Only a Temporary Tragedy

The secular scientific case for survival after death is the alternative to all the religions that were invented by priests who knew nothing about cosmology.

The study of the normally invisible part of the universe - subatomic physics - provides a rational explanation for so-called "paranormal" or "supernatural" phenomena, "ghost stories".

If you don't like the idea of, when you die, immediately being reunited with your loved ones who have gone before you, then you can always go back to what you thought before this proof of survival reached you:

When you are dead, you're dead - as taught by orthodox scientists across every discipline

Resting in peace in the ground, waiting for a saviour-god to return and judge you

What Does the Campaign Do?

To learn more about the Campaign for Philosophical Freedom, we recommend you read the following:

The Campaign for Philosophical Freedom has no formal membership, only supporters.

For well over 30 years, we have relied entirely on private donations to fund our work.

We do not actively solicit donations, but any money sent is gratefully received as we are in constant need of funds to cover everyday expenses, as well as the increasing costs of maintaining this website. 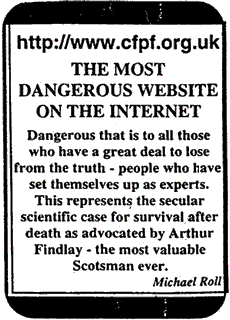 Unless otherwise indicated, all content is free to reproduce and rebroadcast for non-commercial use.
If you use our material, you must credit: The Campaign for Philosophical Freedom - www.scsad.afterlifeinstitute.org

E-mail the webmaster.
Inquiries to Michael Roll will be forwarded to him.
Before you e-mail us, check whether the information you seek is not already on the pages of this site.
Contact Address